And in other, equally silly parts of the panel we talked about working with videogame writers and directors.

I want to make this VERY clear: we had NO FUN AT ALL on this panel. @JamieZubairi1, @SamanthaBeart, @sallybeaumont1, @WadjetEyeGames and I hate each other AND our jobs. pic.twitter.com/Lp81ZFzNAp

A few weeks ago I was invited to speak on a panel of voiceactors about our experience at EGX, a games convention at Tobacco Dock in London. Talking about how we started and how we work. To be honest I was fairly newbie compared to the women voices on the panel – Amelia Tyler who is famous for various roles as well as donning a MoCap suit and doing that section of the job too! Also Samantha Béart, another seasoned character voiceactor for games.  Really exciting to be on that panel! And Sally Beaumont (who got me on the panel).

Dave Gilbert, who directs games chaired the panel and was able to ask us questions about what we do. I’m afraid I had much too much fun laughing to give cohesive answers.

The full session is below but in the link to the tweet above are all the funny bits that Amelia Tyler edited together.

#Vampyr – a mention in a review

I found this little mention for my role as Rakesh in Vampyr! How nice to be mentioned!

“Let’s talk about the voice acting shall we?

I loved the attention to detail that Dontnod has provided players. The characters who are from different countries are actually voiced correctly. The idea of wandering accents is not an issue in Vampyr like is often the case in many movie productions. Characters portrayed by actors are well done and thought out properly. Even the writing of the different characters is done brilliantly.

First, Jonathan Reid is voice acted by a man named Anthony Howell, a British actor who has done roles in other games such as Star Wars: Battlefront II, Warhammer 40,000: Dawn of War III, Mass Effect: Andromeda, and Horizon Zero Dawn. And he’s no stranger to vampires either, because he play Lord Laurent in the 2013 TV series Dracula. (I’m actually still salty they cancelled the show after only one season. I NEED TO KNOW WHAT HAPPENS).

Jamie Zubairi plays the voice of Rakesh, and he was born in the UK although he grew up in Kuala Lumpur, Malaysia. While his acting credits [are] shorter than some of the other voice actors in the game, Mr. Zubairi was hired for games like James Bond 007: Bloodstone and Just Cause 2.
While there is a decent cast for the various characters in Vampyr, many of the actors are from England – a detail that goes a long way in creating an immersive video game experience. Though, birth in a particular country does not mean that other actors could not have taken on roles. All I’m saying is the use of primarily British actors delivers a captivating and realistic story.

Each character is tailored perfectly to portray different types of people from their sexual orientation right down to their social standing and temperament. These characters are voice acted in a manner that fits the story and the time period well enough that it’s quite noticeable to keen observers.

I absolutely love every bit of the sound and music used in Vampyr. I especially love the casting choices for the characters in the game. ”

You can read the whole article by Susan N here!

Inspector Chen is a fictional police detective who has risen in the ranks of the Special Case Bureau in Shanghai because of his unusual way of solving cases. He was a poet and academic before becoming a police inspector and his commentary on China, post-Tiananmen, combined with his love for classical Chinese text as well as knowledge of modern Western poets, makes for a very popular and enlightening read. The series of books were written by Qiu Xiaolong, a Chinese writer living in the US. The BBC have dramatised all 9 of them for radio drama, now available through Audible. I was lucky enough to have played Chen for them. We’re about to embark on the 10th book. Here is a link to the recording session at the BBC of Series 3 (books 7-9)

High audiodrama on the set of ‘Dark Shadows’ 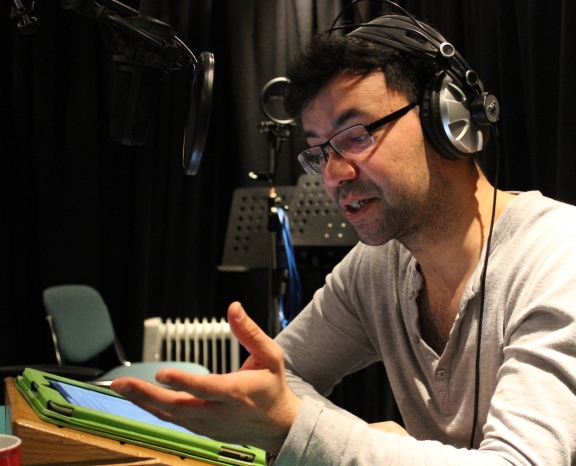 On Bank holiday Easter Sunday I made my way to Camden in north London for my first ever audio drama recording. I was pleased that Joe Lidster and Big Finish asked me to come in and voice a character called ‘Sketch’ for this Dark Shadows a long running series on television in the 1960s and 70s. It’s now been re-written as audio drama as starring Quentin Collins and Doona McKechnie.

This was my first recording of this kind since my days with Roger Norwood at LAMDA when we did some training at a studio in Primrose Hill somewhere. It was great watching the smooth toned Emma Carter at work, moving from characters and voices effortlessly. It was thanks to Emma that I felt at ease with the technique and just got down to doing what I do best: character voices.

The character I was voicing was interesting in that he had to transition from being  quite a low-status character with a foreign accent (Indian accent) who is a runner on a tv show and then reveal himself slowly to something more sinister. Going from one to the other in very few lines during the reveal was really fun and I’m glad that in my acting work because I work quite physically going from one physical characterisation to the next (and sometimes by degrees!) it was something that didn’t phase me.

But what happens to him? Who knows? Perhaps we’ll find out in other episodes!

I really wish I had snuck my smartphone on to record the transformation scene where Emma had to voice the sequence. No real spoilers there but it was one of the funniest things I’d seen. The things we do!

I had lots of fun working with another voice actor. Even though we had very little dialogue together, it is refreshing to do actual drama amongst all the corporate work that I have been doing lately.

It will be available later on in the year from the Big Finish website.

I thought it was time to update my drama demo as it was feeling a little in need of refreshing. Because of the nature of the work, most of my voiceover home recordings are corporate and have a certain tone which I’ve been working with with some efficiently. The text of most corporate voiceovers don’t usually deal with emotion or conveying a story. (I say that, some really creative corporate voiceovers have been like little stories, or I had to play certain characters). As I haven’t been working with drama scripts for several months I knew that I’d have to have some help.

Today my actor and voiceover friend Amanda Gordon came by to help me record these demos so that I can concentrate on the acting side and not have to worry too much about pushing buttons. I have already recorded a version of these but as an experiment, Amanda offered to direct me on these pieces. From what I have heard already, doing a compare and contrast listen to the tracks, I really like the suggestions that Amanda has made: “Slow down”, “tell ME the story, make me see the images that you’re making”.

Really helpful suggestions. I guess it doesn’t matter how experienced you are as a voiceover artist, it really does help having an outside ear when you’re recording your own demos. Someone in the business whom you can trust who can talk to you straight as both a friend and professionally.

Having listened to one of the recordings I can hear the subtle changes in variety and colour that my voice has after her direction. I hope I can post these up here when I’ve finished with the edit and mixdown.

I thought I’d start a voiceover site now that I am getting a lot of voiceover and translation work which is independent of my acting and artistic ‘work’. From now you’ll be able to hear what I sound like with various clips on the clip page – there will hopefully be images (as I’ll be making them video clips so it’s not merely the audio).

I’ll also hopefully be sharing what advice and learning that I have been given along the way. It won’t be that technical as I’m not very technical but at least it’s be jargon-free for new users. Of course, as I get more into the business it will have to include stats and things like that, but hopefully enough for anyone to understand.